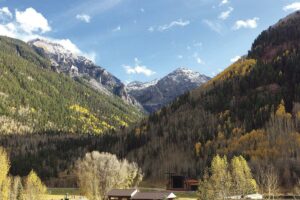 TELLURIDE – The 10-parcel lot on the southeast corner of East Colorado Avenue and Willow Street that was to be the future home of a new 50-bed hotel called the Ajax Hotel is under new ownership, as Town Park Partners LLC recently purchased it for $12.75 million.

Blue Sage Ventures, a boutique real estate and development company with offices in Steamboat Springs and Boulder, will lead the development team that still plans to build a 50-room hotel, deed restricted housing and free market condos on the half-block area next to the post office. JNS, a Denver-based hospitality architectural firm, is currently working on a “complete redesign,” according to Mark O’Dell of LIV Sotheby’s International Realty, who will be handling the leasing and sales. He explained a majority of developers wanted to scrap the hotel idea and only build condos on the space.

“It would be a dying shame if that lot was converted into condos only,” he said. “It is our prettiest piece of land in town, in my opinion.”

The previous owners, Telluride Ajax Investment Partners, bought the lot for $5.8 million in 2014, but struggled to secure funding for the multi-use project.

“Financing pursuits during 2017 hit a wall when a foreign investment group was unable to close after more than six months of waiting due to issues with repatriation of foreign funds. The struggle for the financing of this project continues to be the hotel component that unfortunately hasn’t attracted the right investor yet,” according to a December staff memo to Telluride Town Council.

But money won’t be an issue for the new developers, O’Dell said.

“We’re not looking to get financing at all. It won’t be a deterrent in this case. The partnership is extremely well funded,” he said. “It’s going to be a different design. It’s going to make sense.”

While a new design hasn’t been finalized, O’Dell explained there are plans to feature a rooftop bar, swimming pools and hot tubs, a spa, and outdoor dining space at the hotel, among other amenities. Once the design is in place, estimating the total cost of the project and drafting a timeline for construction will be the next step.

“Until we know what we’re designing, there’s no way to put a cost on it,” O’Dell said. “It won’t be inexpensive because the whole team is committed to doing a high-quality project.”

In a 5-2 vote, council granted the previous developer a one-year extension of the project’s Certificate of Appropriateness, or vested property rights, during a December meeting.

The new owners will not seek any changes to that or the current entitlement, but at this point, there are no plans to partner with the Starwood-Marriot group properties, which was to oversee operations of the now defunct Ajax Hotel.

“Our team intends to work diligently to produce a design that works within the current entitlement, meets the test of financial viability and delivers the Town of Telluride a world-class project,” said Stephen Shelesky, managing principal of Blue Sage Ventures.

The idea of having a hotel on the east end of Main Street should attract more visitors to that stretch of downtown, O’Dell said. Council members agree.

“A project of this nature is integral to having a functional business district,” Mayor Sean Murphy said at the December meeting. “Having a property like this is invaluable.”

As an anchor tenant on the east end, the new hotel will create a community meeting space as well, O’Dell said.

“The public should be able to go up there anytime,” he said.

Plus, people can watch the festivals in Telluride Town Park from the rooftop, an unrivaled view, according to O’Dell.

“I think people are going to get re-excited about it,” he added. “Our intent is to do something that’s never really been done in Telluride. Our intent is to be the finest product in the Telluride region.”